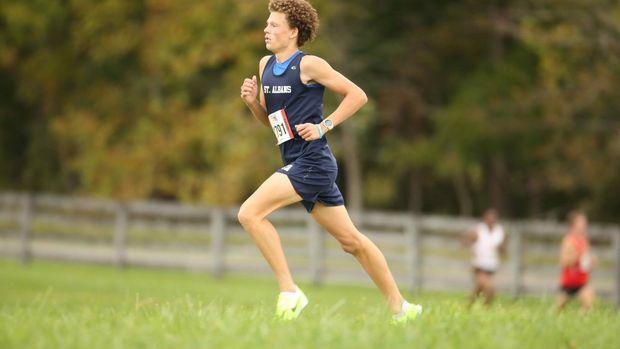 The Shawan Downs' well-known fast race course hosted the annual Maryland XC invitational for many of Maryland's most elite runners this past Saturday on October 8th.

The boy's Black & Gold race had many notable contenders aiming for a spot on the podium. However, Pierre Attiogbe, a dark horse from St. Albans For Boys in Washington DC, took the win in an impressive time of 15:02, 33 seconds in front of Mt. Saint Joseph's Charlie Butler, who took second place in 15:35. Following closely behind Butler was Dulaney senior Tyler Dailey (15:38). The Calvert Hall boys dominated as a team with junior Cameron Davis (15:43) and senior Ryan Connely (15:48) finishing fourth and fifth and placed two other scoring teammates, Stephen Gonzalez (16:17) and Cort Schroder (16:17), in the top 15 spots. Calvert Hall came in first with a score of 58 while Towson High School, led by Kieran Mischke (16:05), came in second with a score of 91.

The boy's Red & White race was won by C. Milton Wright's Ashton Tolson with a first-place time of 16:13. Following only 3 seconds behind was Andrew Brown from John Carroll High School in 16:19. A larger spread of time was present between the next few finishers as Caleb Tener from St. Vincent Pallotti came in third in 16:26, Ryan Gibb from Broadneck (fourth in 16:47) and Ryan Collins from Gilman (fifth in 16:51). The Gilman boys took the team title for the Red & White race with a team score of 156 while the Linganore boys scored 167 points in second.

The boy's JV race was swept by Calvert Hall's underclassmen boys with a winning score of 21, 96 points ahead of the second place team, Severna Park, who scored 117. Amid the race, Calvert Hall went 1-2-4-6-8 for their top five scoring boys featuring sophomores Hayden Malstrom (17:08) and Max Larcher (17:18) leading the pack. This impressive performance also had an average team time spread of only 28 seconds. Griffin Trout ( Third in 17:23) from Broadneck, Caden Lazzor (Fifth in 17:28) from Severna Park, and Venya Kuzichev (Seventh in 17:36) from St. Albans For Boys were among a few of the top finishers who broke up the Calvert Hall pack.

Which Team Winner Had The Best Day at MDXC?

Lock in your pickand see results 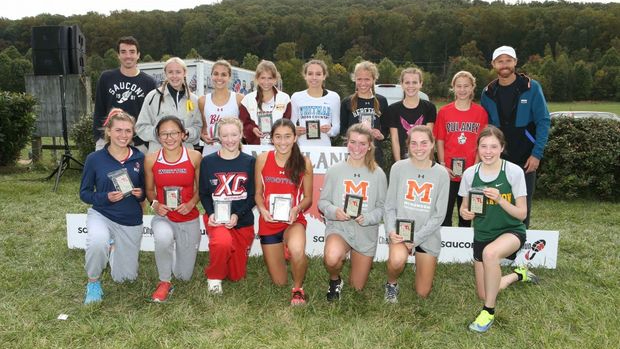 The girl's Black & Gold race was dominated by Thomas S Wootton high school who had a solid group finish 10-11-12-13 and their fifth girl in 22nd. Senior Maya Gottesman (19:16) led the pack followed by Charlotte Chang (19:19), Victoria Ketzler (19:27), and Meilani Rodgers (19:29). The total team score of 67 was 61 points ahead of the second finishing team, the Hereford girls. Other notable finishers included Grace Finnegan from Richard Montgomery who ran a winning time of 18:17. In second place was Alexia Avila (18:24) from Montgomery Blair and Sylvia Snider (18:25) from Hereford, only 1 second behind.

The girl's Red & White race was won by Howard high school's frontrunner Kiley Mann who finished in 19:23 with over a 30-second gap between her and the second place finisher Grace Doerschner.

Doerschner of Archbishop Spalding (20:00) ran 20 flat with another gap of 12 seconds before more finishers trickled in. Overall, C. Milton Wright took the team win led by Ella Swayne (20:27), who finished ninth. C. Milton also placed four of their girls in the top 20 spots helping them reach a winning score of 78 points while The Howard Lions came in second with 147 points.

Severna Park's JV girls came through with a big win in the junior varsity race. Led by Taylor Denton (21:09), the Falcons brought two strong trios into the race with Denton, Quinn Allison (21:16) and Brooklyn LaBier (21:23) going 1-2-3. The second Severna trio finished only a few spots back with Abby Crowley (22:15), Isabella Elliott (22:17), and Jocelyn DiAngelo (22:18) going 10-11-12. This impressive feat scored 27 points which put Severna far ahead of the competition. Other top finishers in the girl's JV race included Jacqueline Sibilia (21:28) and Keegan Clarke (21:58) from Dulaney high school and Elsepth Skepton (21:55) from Notre Dame Preparatory who brought her team in second with 113 points.