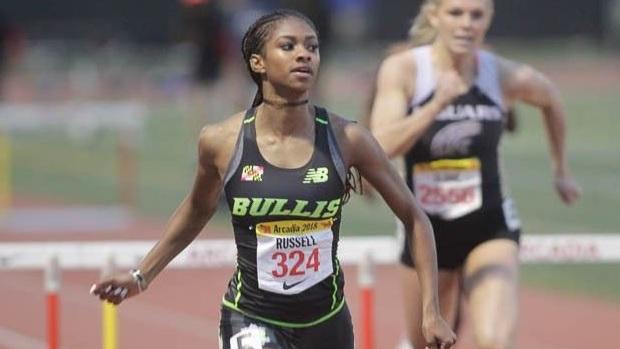 Masai Russell certainly took advantage of the warm California weather this past weekend. She became the first girl in the US this outdoor season to break 42 seconds in the 300 hurdles, dropping a personal-best 41.28 winning effort at the Arcadia Invitational.

The first weekend of racing in April failed to bring some favorable weather, but some of Maryland's best athletes traveled out-of-state this weekend to compete. In fact, many of the top performances from this weekend were recorded in other states, as both the Carolyn Legard Relays (VA) and Crimson Tide Invitational (DC) attracted a multitude of Maryland teams.

On Friday night, Bel Air senior Kieran McDermott made his 2018 1600 debut at the West Chester University Golden Ram Invitational in Pennsylvania. Last year's 4A 1600 champion wasted no time at all in jumping to the top of the state leaderboard in the event, dropping a 4:14.30 season-opener and winning by over 15 seconds. McDermott was entered for a seismic showdown with Ryan Lockett at the Pikesville Track Classic which has been moved to next Friday evening. 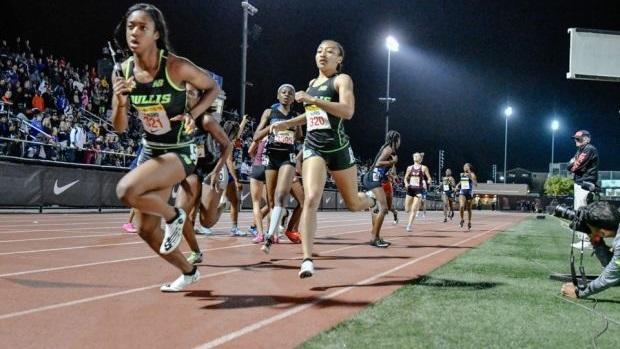 With their win at the Arcadia Invitational the Bullis girls 4x400 relay now ranks seventh in the nation. The scary part? Out of the three sprint relays (4x1, 4x2 and 4x4) that's the lowest they rank. (Photo by Clark Kranz)

Over at the Crimson Tide Invitational at Dunbar High School (DC), St. Mary Ryken's Kelisa Cain won both of her head-to-head matchups against Frederick's Jaida Smith in the 100 and 200. Her 11.87 performance in the 100 meter dash broke Olivia Ekpone's meet record and is the second-fastest time in Maryland this year. Northern's Claudia Dolan and Leonardtown's Nelle Ray provided some SMACtion in the 3200, as they finished second and third (both at 11:24) in the race and on the state leaderboard, behind only Dolan's teammate Abby Sweeney. On the boys' side, Northern's Greg Oldham turned in the fastest 2K steeplechase (6:14.67) the state has seen since 2014, while South River's Xavier Shirley jumped 22'11 to take the top spot on the long jump leaderboard.

Finally, at the Carolyn Legard Relays at Woodson High School (VA), the Northwest boys and girls brought home team titles behind some outstanding individual efforts. Editta Pessima broke the meet record in the 100 hurdles - her 14.97 time has been bested by only two other Maryland athletes this outdoor season to date. Taylor Wright, meanwhile, became the first girl to clear 5'6 in the high jump this season. The Jaguars also won the 4x100 and Swedish (1-2-3-4) relays.