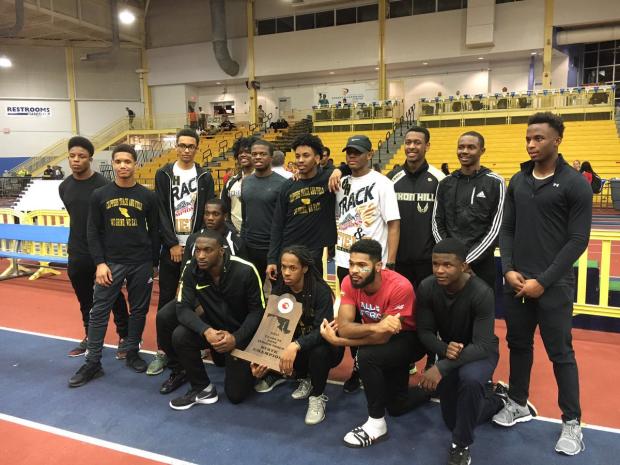 While no points out of the field events and a DQ in the 4x400 meter relay certainly made the team scoring closer than projected in the 3A boys race with Oxon Hill finishing 10 1/2 points ahead of Oakdale for the team title, the Clippers still showed their champion pedigree and took care of business despite a few hiccups.

Last year it was Jabari Michael as the team star and top point scorer. This year, that title belonged to Gary Ross in winning the 500 (1:06.04) and 800 (1:59.73) meter titles, while anchoring the 4x800 meter relay squad to victory in a time of 8:07.56 for their team's first 10 points on the day. Ross averted disaster in the 500 when he was clipped midway thru the race, but was able to stay on his feet and regain his stride.

Usually where Gary Ross is found in a race, one can find teammate Aaron Robinson next to him. Robinson was a key reason for Oxon Hill to move up in the 4x800 meter relay ahead of early leaders Oakdale, while the 500 saw him actually have to run for time for the slow heat not with Ross and he did his job running the second fastest time overall in 1:06.69. Exhaustion set in for the 800, which he still picked up a point in 8th place.

The 55 meter hurdles finals nearly had 3 Clippers make it in with Zackary Sampson on the outside looking in as the 9th fastest qualifier, but Daniel George (3rd, 7.70) and Caleb Jordan (5th, 7.78) scored a combined 10 points for Oxon Hill boys in the finals. George also added another 2 points with a third place finish in the 300 meter dash (36.27).

Their 4x200 meter relay found themselves locked in a close battle with Wilde Lake approaching the anchor leg exchange, but a baton knocked out inadvertently for Wilde Lake ended up allowing for convincing win for the Oxon Hill boys with a 1:31.13 clocking.

The 21 points produced in the last 3 events (despite the DQ of the 4x400) pushed Oxon Hill ahead of Oakdale, who gave them a strong challenge including a 4x400 win to close the meet.