The 2021 AACPS XC Championships were one of the first county championships meets to take place in Maryland. The meet took place at Chesapeake-AA High School in Pasadena, Md on Oct. 26, 2021. To begin, the Varsity Boys Race was filled with heavy-hitters. It seemed likely that Severna Park's Tyler Canaday would take the individual title after running an MD No.6 all-time at the 2021 Great American XC Festival. To add, he would most likely be followed by his teammate, James Glebocki. However, the race outcome had a bit of a twist. Annapolis Senior's Luke Coffin ended up snagging first-place with an MD No.11 all-time of 15:15.00. This time was also a 5K meet record and made Coffin the second-fastest athlete in the state based on 5K performances. Coffin's blistering time granted him a 12 second lead over the runner-up, Canaday, with a time of 15:27.70. The next athlete to join the ranks became a battle between Arundel's Tucker Sangster and Severna Park's James Glebocki. Sangster managed to outpace Glebocki, taking third place with a time of 15:40.10, just a second ahead of Glebocki. 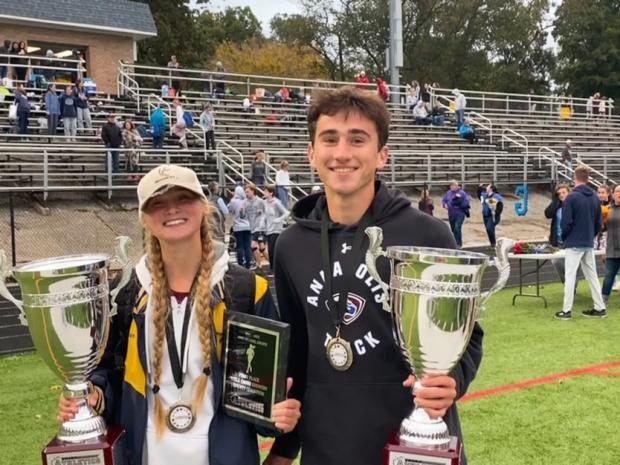 Girls pull out a nail bitter by 3 pts and the boys get 10th straight title!! On the girls' side, Broadneck Senior's Mollie Fenn was victorious, as expected. Fenn had a great racing day as she improved on her 5K time drastically. Fenn dropped 30 seconds from her previous 5K time of 18:30.00 to a PR of 18:00.30. This time is considered an MD No.20 all-time and made Fenn the third-fastest female athlete in the state (based on 5K performances) behind Mount De Sales' Juliette Whittaker and Richard Montgomery's Grace Finnegan. The runner-up for the race was Arundel's Katherine Leddy who also had a PR. Leddy dropped 13 seconds, going from a time of 18:30.5 to a PR of 18:17.10. Fenn and Leddy were the only girls to dip under the 19-minute mark for the meet. The third finisher was Severna Park's Mallory Trutenko with a time of 19:24.30. Fourth was taken by Broadneck Senior's Stephanie Costello in a time of 19:38.60. Fifth was taken by Annapolis Senior's Audrey Walters in a time of 19:42.90. All top 5 times were considered elite performances.

Regarding the time title, it was expected to be a close battle between Broadneck Senior and Severna Park. Both schools managed to get four of their top runners to place within the top 10. However, it was Severna Park, led by Trutenko, that ended up on top with 39 points. Broadneck Senior, led by Fenn, followed behind in second with 42 points. The third-place finisher was host Chesapeake-AA with 102 points.

Although the Broadneck Senior girls didn't win the Girls Varsity Race, they were able to win the Girls JV Race, breaking Severna Park's consistent winning streak for the meet. Freshman Ryann Bahen took the first-place title with a time of 21:45.50. Severna Park then rounded out the rest of the podium with Sophie Magyarosi (21:57.70) and Natalie Bowman (22:07.60) coming in at second and third, respectively. Yet, the Broadneck Senior girls still managed to grab the team title after taking the first spot, as well as spots 4-7. The Broadneck Senior squad scored an impressive 23 points to take home the top honors. Severna Park came in second with 34 points, while Chesapeake-AA came in third with 85 points.