Each section from 4A competed in their respective regional championships on Thursday, Nov. 4. All four sections (4A East, 4A North, 4A South and 4A West) competed in different regions in Maryland. We recapped how each championship meet went and what this means for the upcoming state championships. (The start of the Boys Varsity Race: Tyler Dailey is an early leader)

In the 2021 MPSSAA 4A North Region Championships, it was an extremely close battle for the individual title. Tyler Dailey had his second photo-finish ending for the season, the first being at the 2021 Maryland XC Invitational. This time, Dailey got the upper hand, taking home the first-place title. He and Northwood's Lamar Wilson went neck-in-neck with Dailey outpacing Wilson by less than a second. Dailey took home the individual title with a time of 16:27.16, while Wilson finished second with a time of 16:27.53. The next two spots were taken by Montgomery Blair athletes. Edward Lyness led the duo with a third-place finish and time of 16:32.93. His teammate, Frederick Alfonso-Frank, took home fourth with 16:35.62. The final athlete to make the top 5 was another Northwood athlete. Nathaniel Davis became the second Northwood athlete to finish, and he ended up as the fifth-place finisher with a time of 16:39.84. 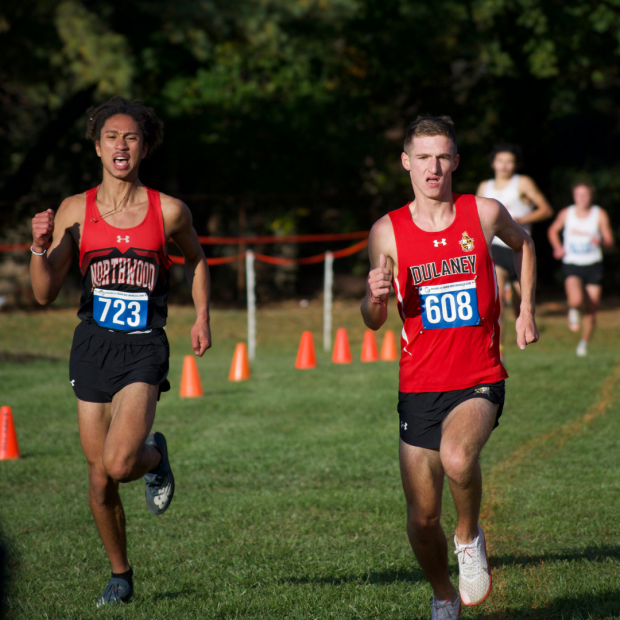 Regarding the team title, the Northwood boys took how the top honors after placing three of their top athletes within the top 10: Lamar Wilson (2nd, 16:27.53); Nathaniel Davis (3rd, 16:39.84); and Ajibu Pascali (7th, 17:00.35). They scored 47 points to take home the team win. The Dulaney boys, led by Dailey and Schultz, took home the top honors with 56 points. Montgomery Blair, led by Lyness and Alfonso-Frank, took third with a team score of 82 points. The Girls Varsity Race was close just like the boys'. This time, James Hubert Blake's Ella Zeigler took home the individual title with a time of 18:28.41. Closely following was Sherwood's Avery Graham, just two seconds behind with a time of 18:30.44. The third-place finisher was Catonsville's Hallie Shepard with 18:50.03. Fourth place was Dulaney's Anna Albergo with a time of 18:58.03. The final athlete to make the top 5 was Montgomery Blair's Alexa Avila, taking fifth in 19:02.60. At the 2021 MPSSAA 4A South Region Championship, Bowie's Jacob Bayes took the Boys Varsity Race. Bayes, a sophomore, outpaced his competitors for a first-place finish with a time of 17:39.75. Bayes also boasted an impressive 15-second lead. The next two spots were taken by Eleanor Roosevelt athletes. Trevor Stuart led the duo with a time of 17:54.76 and became the only other athlete besides Bayes to run sub-18 at the meet. Stuart's teammate, Benno Wien, finished behind him, taking third with 18:29.46. The fourth-place finisher was DuVal's Joshua Mbuashu-Ndip with 18:40.03. The last athlete to make it to the top 5 was Parkdale's Carlos Ochoa, taking fifth with 19:10.51.

On the girls' side, C.H. Flowers' Jaelynn Blackwell became the 4A South Region Girls Champion. Blackwell finished first with a time of 21:43.68. The next two spots were taken by Eleanor Roosevelt athletes once again. This time, Rebekah Pase led the duo with a second-place finish and time of 21:59.23. Her teammate, Sydney Fiore, took third with a time of 22:21.13. Then, another C.H. Flowers athlete joined the top 5. Narissa Hill was the fourth-place finisher with 22:50.03. Suitland's Kiara Lee rounded out the podium with a fifth-place finish and time of 23:17.69.

In the 2021 MPSSAA 4A East Region Championship, it was an Arundel takedown. Arundel took home both of the individual titles. Starting with the Boys Varsity Race, Arundel's Tucker Sangster was the surprise winner, beating out Annapolis Senior's Luke Coffin who is currently ranked #2 in MD (based on 5K performances). Sangster snagged the first-place title with an impressive 15:50.00, which granted him a lead of approximately 13 seconds. Sangster was the only athlete to run sub-16 in not only this meet, but in the entire 4A region as well. Coffin followed behind in second with a time of 16:03.80. Then, Severna Park's Ronan Byrne became the third-place finisher with a time of 16:29.80. Old Mill's Damon Martin followed him with a fourth-place finish and time of 16:37.90. The final spot in the top 5 was taken by another Severna Park athlete. Liam Hagerty finished fifth in a time of 16:38.40.

(Hear from Katherine Leddy on how she became the 4A East Region Champion)
Video: Paul Fenn

The Girls Varsity Race had similar results as the boys'. Another Arundel athlete took home an individual title. Katherine Leddy was the surprise winner, outpacing Broadneck Senior's Mollie Fenn. Leddy finished first with a time of 18:37.80, which was also a meet record. The previous record was held by an Arundel athlete like herself. The record was from the 2004 4A East Regional XC Meet where Marissa McPhail ran a time of 18:40.00, meaning that Leddy broke a 17-year-old record! The second-finisher for the race was Fenn with a time of 18:47.80. Then, the next two spots were taken by Leonardtown athletes. Parker O'Brien led the duo as she finished third with a time of 19:16.40. Her teammate, Elena Blodnikar, finished fourth with a time of 19:24.40. The fifth finisher was Annapolis Senior's Audrey Walters with 20:09.40. On the girls' side, Bethesda-Chevy Chase's Varri Higgins dominated the race. Just three days before, Higgins had a PR at the 2021 Montgomery County Public Schools XC Championships where she ran an impressive 18:11.00. Higgins took her fifth first-place finish for the season and became the 4A West Region Champion after finishing with a time of 18:32.06. Her time granted her a lead of over a minute. Richard Montgomery's Grace Finnegan followed in second with a time of 19:33.58. A little bit after, Urbana's Ivy Coldren took third in a time of 19:47.33. Walt Whitman's Katie Greenwald become the fourth-place finisher in 19:55.83, as well as the last girl to rub sub-20 at the meet. The fifth-place runner was Walter Johnson's Madeleine Simmons in 20:15.78.