On Thursday, we paid the Severna Park boys cross country team a visit with their last workout prior to the Bull Run Invitational on Saturday. A course which their team has been quite successful on the last three years in winning the 4A state title at Hereford in each of the last three seasons. 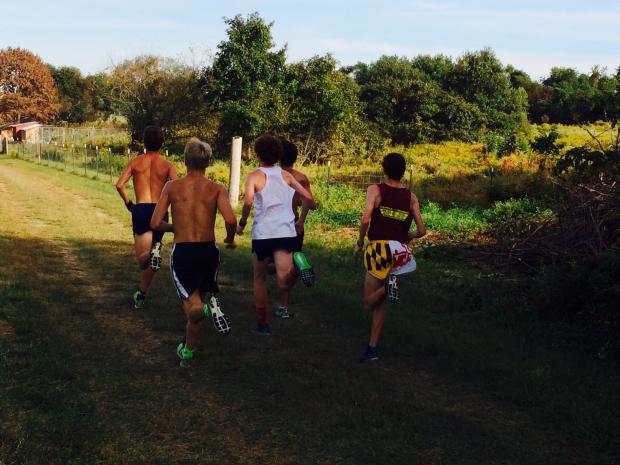 After doing mile repeats earlier in the week on Tuesday, Thursday's workout was more of an easier secondary workout for the team doing an on and off tempo segment run starting out first on a marked trail for ever tenth of a mile to get their pace down before entering a cow pasture field at Kinder Park to do tempo segments starting out at a minute and all the way up to six minutes in duration before working down the ladder workout back to down to one minute.

Following the tempo workout, the team did what Coach Alcombright called half of a half speed workout which had a measured out 100m, 120m, 140m, 160m, 180m, and 200m starts on the same field which they ran their tempo workout on. The team was instructed to run them at their mile pace, while the last few they could pick up the intensity a little more. 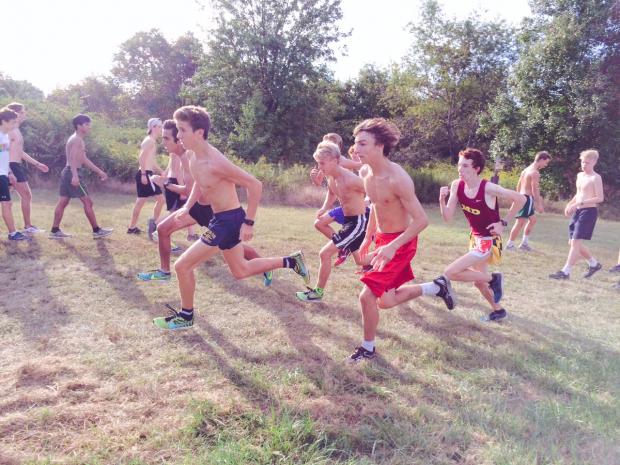 Throughout the workout, the runners were stressed to not press too hard and save it for Saturday, which will be a big test for the Severna Park boys racing in a deep field in the elite race at Bull Run including the team who currently owns the #1 ranking in the state and standing in the way of their potential state championship 4-peat in Dulaney. 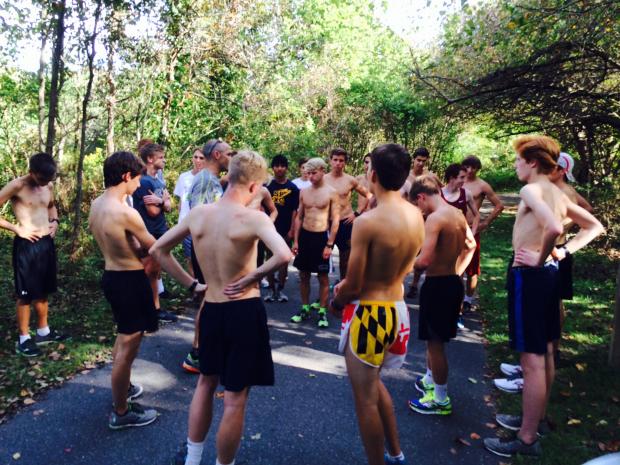 Their head coach Josh Alcombright, a native of New York, seems to be really hitting his stride as a coach now at Severna Park, having guided his team to two consecutive years to Nike Cross Nationals and really put the state of Maryland more on the national map again as his team last fall finished 13th at nationals.

We had a lot of questions to ask Coach Alcombright and pick his brain on the reasons for the success of his recent teams as well as what to expect for the current team. Check out our in-depth interview above after the practice with Coach Alcombright.

It is very clear that Severna Park has two stud runners for their #1 and #2 spots which alternate between Joshua Tucker and Andrew Forsyth. The only two runners back from their top five varsity lineup a year ago, Tucker and Forsyth have become arguably the best tandem in the state having both ran well into the mid 15 minute range for 5K this season.

Tucker moved to Severna Park just last year from Arizona and after running 20-30 miles a week at his old school saw an immediate improvement jumping up to 50 plus miles with the Severna Park program to become the runner he is now. Forsyth is following in the footsteps of his older brother Ryan who helped lead the first NXN squad and state champion squad for Severna Park, which he could very well best all of his older brother's (now at University of Colorado) high school times this fall and spring. Check out our interview above with Tucker and Forsyth.

Next we spoke with arguably the three most important pieces to the 2015 team's success when it comes to the Maryland State Championships and NXN Southeast Regional at season's end with the runners rounding out their top 5 in Kasey Gelfand, Spencer Davis, and Matt Cambon. None of these runners came into this year with gaudy or impressive track times or even fast 5K PR's from a year ago, but all three have helped continue a great recently built tradition at Severna Park to make them one of the state's premier programs.

Gelfand went miraculously from a 4:59 miler this spring to a 16:11 5K runner this fall in only a few short months to become the team's #3 runner. Cambon might have the most experience among the trio having raced at NXN one year ago but finishing near back of field in 192nd place, but has already run under 17 minutes and ready to improve on his 38th place state meet finish in 4A from last November.

Spencer Davis was also a back of the field finisher last December at Nike Cross Nationals (1896th), so like Cambon instead of being along for the ride to NXN last year now is being counted on to make the ride possible. He ran very well at the Northampton Invite in Pennsylvania earlier this month to run a 36 second PR of 16:24. 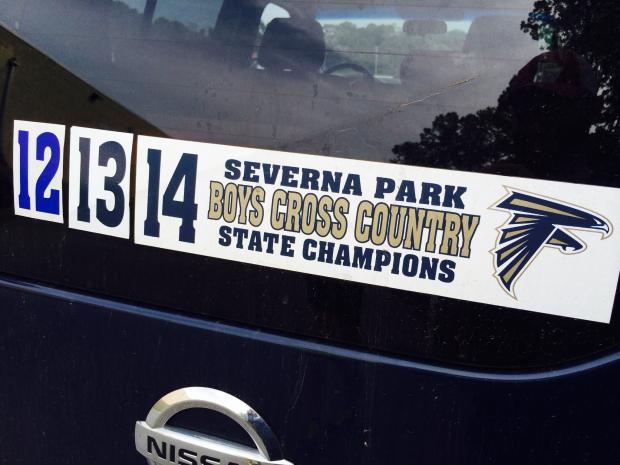 "Don't let go of the rope" is a mantra the team preaches to each other and one that the Severna Park boys will certainly need to live by in the last half of the season in order for them to keep their streak of state championship titles going against a formidable opponent in the Dulaney boys and then start to see if they can make another run at NXN reloading on the fly. Based off what was seen in our limited time with them on Thursday two days prior to the Bull Run Invitational, they certainly working on upholding that tradition for this year and years to come.