Three days after covering the Bull Run Invitational, we were back at Hereford High School, but this time visiting specifically with their boys and girls cross country teams. The Hereford cross country team is coached by John Roemer, who has been with the program now 20 years and prior had run and attended the same high school which he now coaches at. The girls team were 2A state runners-up last year, while the boys team finished third in last year's state meet. The program has been historically one of the top programs in the state dating back to the 1970s, especially being a small school of 2A size. 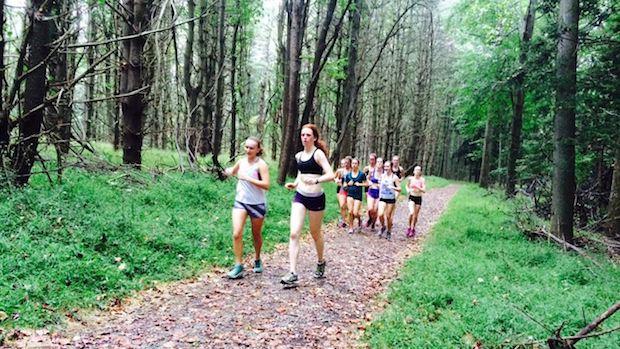 Their workout on Tuesday was 5x1000 meter repeat on a loop on the woods trail across the street from their school grounds. Believe it or not, despite the state meet course being on their school grounds, the Hereford cross country team does not train on it often. According to Coach Roemer, they might do one workout a season on the "Dip", the famous downhill and uphill ravine that runners hit twice on their home course.

Only their top training group called the "Black Group" was present for Tuesday's workout with rest of team that crests over 90 plus runners competed in a league meet at Towson. The recovery was roughly 3 to 3 1/2 minutes for most of the team. Their #2 runner Kelly Shearer was held out as a preventive measure after feeling tenderness in her ankle after her top 5 finish in the Bull Run Invite on Saturday. She was present warming up and cooling down with the team helping Coach Roemer give out splits to the runners.

It was the Coffey siblings as the top performers in the workout with senior Sarah Coffey running up with the varsity boys after the first repeat as she started out running near 3:40 for her first intervals and worked her way down under 3:30 by the final repeats. The workout was geared towards simulating 5K race or slightly faster. Coffey is part of a loaded 2A classification for girls individuals, but helped lead her team at the Bull Run Invite with a great runner-up run on her home course in the elite race this past Saturday. She was a state runner-up in cross country two years ago as a sophomore, while finishing 8th as a junior last fall.

With Shearer out of the workout, it was another senior leader in Alicia Kozlowski leading the rest of the girls in the workout. Kozlowski is looking to dip under 20 minutes soon this season after finishing 6th last spring in the state outdoor 800 meter run and running a 20:03 5K PR at the Barnhart Invite 3 weeks ago.

It was her kid brother in sophomore Dillon Coffey who was running ahead for the boys as he has certainly made a leap in his high school running from year one to year two. Ethan Batchelor was the team's top returnee from last year's squad, which only returned 2 varsity runners, but Coffey seems to moved up to join Batchelor as the team's top two front runners. Coffey finished 6th in the medium schools varsity race on Saturday with a 17:06 clocking at the Bull Run Invite. Coffey and Batchelor ended up in the low 3:20's for their final 1K repeats on Tuesday. Their squad is hopeful to come together at season's end and compete for another top 3 finish in the 2A state race on their home course.

Coach Roemer was pleased with the workout on Tuesday as they were preparing for this Saturday's Octoberfest Invite in Virginia, but that meet has since been cancelled to predicted heavy rainfalls. Their team has several meets of importance in October on their calendar, but probably none bigger than the Baltimore County Championships on October 24th.

Don't forget to WATCH our Workout Wednesday from last week too with the Bull Run Invite champions Severna Park!